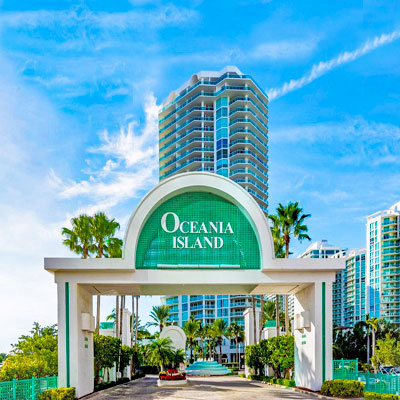 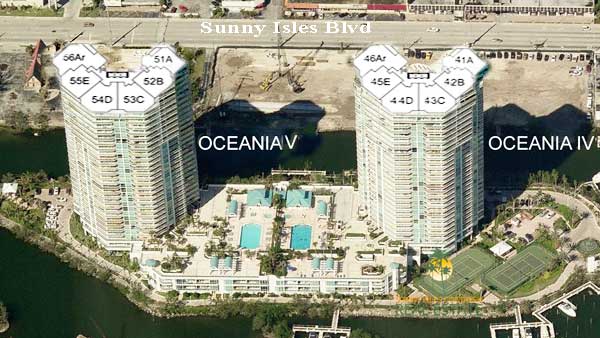 Oceania V Condos, located on the Intracostal Waterways between Oceania VI and the prestigious Atlantic Island Homes at the southern portion of Sunny Isles Beach. Oceania V real estate is the newest of Oceania’s towers developed in 2002 with 157 residences and 29th floors.

Owners enjoy one of the top luxury waterfront residential buildings; floor plans from one-bedroom to three bedrooms range in total size from 1,260 to 2,970 SqFt. Oceania II, Oceania I, and Oceania III sit on the ocean side on Collins Ave.

Oceania V Condo is within walking distance to restaurants, houses of worship, and the Haulover Inlet. The Oceania community is only a few residential buildings in Sunny Isles real estate that allows self-parking to its residents.

Back in 1971’s The Beatles, the Monkeys, Sammie Davis Jr., Frank Sinatra, Ava Gardner, Ike, Tina Turner, Jimi Hendrix, Little Richard were just some of the start who played, hung out, or performed in Sunny Isles. One of the more infamous sp o ts for partying wasn’t on the beach, but on Fairyland Island, which jutted into the Intracostal Waterway.

In 1957 Joe Hart founded the Pickin’ Chicken restaurant, The Castaways was a sprawling hotel designed by architect Charles McKirahan. The parties at the hotel’s Wreck Bar that was open from 11 Am-5 AM were legendary for celebrity visits, and by the 1970s, their debauchery.

Today the Castaways is only a memory; it was demolished in 1984 and is now Oceania Island, where the 341-foot-tall Oceania IV and the 354-foot-tall Oceania V now stand. With only 24 boat slips, The Intercoastal Marina Association (Oceania Marina) has opportunities to own your boat dock up to 60 feet for residents only.

The marina includes electricity, water, storage, and 24-hours security. Only a few minutes to Haulover inlet. Oceania has its park on the west side of Collins Ave and consists of benches and a walkway. No dogs allowed opens from sunrise to sunset.

Sunny Isles Beach is Florida’s Riviera with opulent, luxurious condominiums lining two miles of pristine, white sandy beaches. The Atlantic Ocean laps against its eastern shores, and the Intracostal Waterways borders the western coast. Life is beautiful in Sunny Isles Beach; it’s a paradise for the rich and famous.

Sunny Isles is north of South Beach and just a few miles from the Upscale, open-air Bal-Harbour Shops that house designer brands like Chanel, Bulgaria and, Jimmy Choo, to name a few and an array of top-rated restaurants.